This man is officially my hero. And because of that, I will dedicate this post to him and his cause.

There is this travelling series that I have been obsessing lately – The Lonely Planet from National Geographic. It is basically a travel show and each episode follows a person in the quest of discovering a certain country. But not in the traditional, touristy way, but in the real way – spending time with the locals, couch surfing and getting into places not really marked as tourist destinations.

Going back to Graham, he had this idea as you will see if you watch the video above, that it’s possible to travel in every country in the world without flying! Let’s just stop there for a second. Imagine: every country in the world – that’s 201 country – only by road or sea. Most people said that he was mad. But he did it. And National Geographic gave him the chance to film this documentary called  The Odyssey – Lonely Planet.

At first, he set to visit all the countries in the world in one year, which was really ambitious, but because of set-backs in some of the toughest countries (about 1-2 months delays in some of them) he managed to set foot in 133 of them in one year. Which got him a Guinness World Record. Because who does that? He spent countless hours in sweaty trucks full of goats, chickens and everything else in between; he spent weeks on the sea, got bad sunburns, he got arrested around 16 times and was in jail 2 times, but the man did it!

And guess what – he even did it for a charity – Water Aid!

What he thought me is that anything is possible. Even when everyone around you says it’s impossible or that you’re the maddest man on the face of the earth for even considering taking a road less travelled.

Look at him, this was his childhood dream – and he really did everything he could possibly do, worked his butt off, but he accomplished it.

For that reason, Graham Hughes, we bow our heads to you. Congratulations.

Let him be the inspiration for this beautiful Saturday. Go out and do something you’ve never done before – go to a tae boo class, try to cook an amazing cake, get a tattoo, go outside and just walk, look people in the eyes – anything that you consider as never done for your pretty self. Just do it! No regrets, no looking back.

Because at the end of the day, I’d rather die with memories than with dreams. 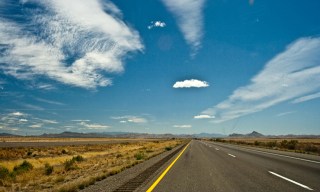